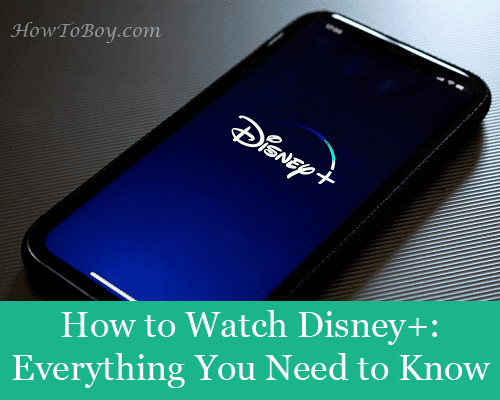 Movie buffs have got another reason to celebrate. A new video streaming service is added to their list and it is from one of the leading movie and TV show makers in the world.

Learn everything about Disney+ in this post including its pricing, supported devices, upcoming launch dates, etc.

Disney+ (Disney Plus) is an on-demand video streaming service from the Walt Disney Company. It was launched on November 12th, 2019 and currently available in the US, Canada, the Netherlands, Australia, New Zealand, and Puerto Rico. It will roll out in the UK, Germany, France, Spain, Italy, and India by the end of March.

The service is designed to feature movies and TV shows produced by the Disney group including evergreen Disney movies, Star Wars movies, and series, Marvel movies and shows, Pixar movies, documentaries, and much more. It will also stream original movies and series made exclusively for the platform.

How much does Disney+ cost?

Here’s Disney+ pricing in other countries:

It also offers a bundled subscription along with contents from other popular streaming services Hulu and ESPN+ which costs $12.99 per month in the US.

When will Disney+ launch in my country?

The company had announced that Disney+ service will be expanded to all major countries by the end of 2021. It has a huge library of epic movies and TV shows which has billions of fans around the globe. Soon they can watch their favorite videos from almost anywhere including smartphones, PlayStation, Xbox, and others.

So what about China? There is no official confirmation about Disney+’s launch in the country. But experts say that it won’t stream in China anytime soon because of the strict content regulations and censorship laws there.

What devices are compatible with Disney+?

Here’s the list of supported devices to watch Disney+,

How much do Netflix and Hulu cost?

The basic plans of both streaming services come with ads and higher plans offer ad-free experience across the devices. However, Disney+ stream content without any ads and has a single-tier plan at this time.

Here’s the cost of some other streaming services,

Visit Disney+’s official website and create your account with email and payment information. Choose a subscription plan. Both their monthly and annual plans come with a 7-days trial and you won’t be charged during the period.

If Disney+ is not available in your region, join the waitlist to get an email alert on the launch.

Read How to Get Amazon Prime for Free

Manoj is a writer, blogger from Kerala, India. He writes content on current affairs, technology, cinema, health, social media, and WordPress. His posts and stories appeared across magazines and websites since 1998.